I’m a little late posting this. Not gonna lie, I totally got sidetracked scoping vintage Sally Hansen on a Polish (as in the country) auction site when I was googling info on this bad boy. I really didn’t come up with much except maybe a bigger wishlist. Damn it. 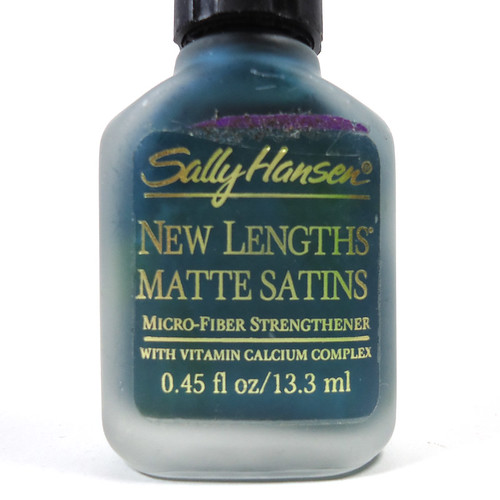 Today’s Green September entry is technically not green, but it’s teal which is both blue and green so I am claiming this one for planet green today (plus my pics make it look way bluer than it really is, I promise). Techno Teal Matte is from the long-discontinued New Lengths Matte Satin line and I LOVE IT. 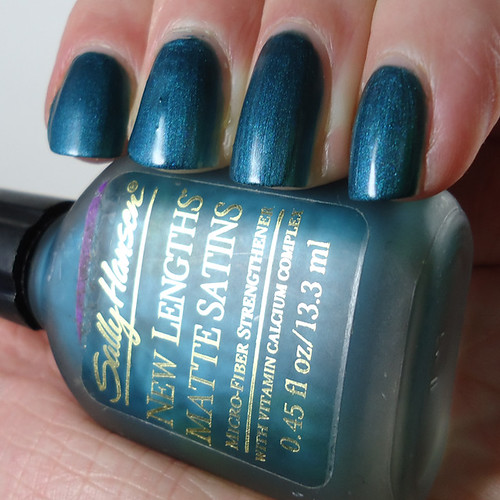 I haven’t done a reference guide for these yet but I am pretty sure I also have a purple as well, and there is currently a gold and bronze on eBay. I really should start collecting these. I love the finish on them. They aren’t true flat matte, but they have an almost waxy finish, which with the gorgeous shimmer just works so well. 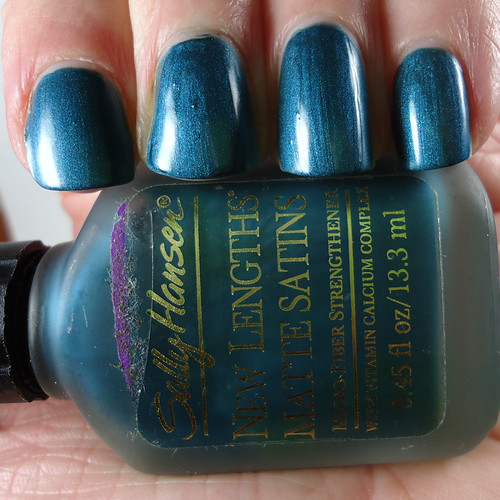 Sadly, the polish is starting to age and isn’t holding up that well. I have no idea if I can use thinner on mattes (it doesn’t actually need thinning either) but I have noticed chunks of pigment starting to form. In fact, you can see one on my nail in all the pics. I was pretty good at removing them mostly while I was applying but that big fat one on the middle of my nail just wouldn’t budge. I could have removed the whole thing and started over, but I hate wasting vintage polish, and who’s to say another big fat chunk of pigment wouldn’t have landed back in the middle of my nail again? I’ll just have to deal with it. 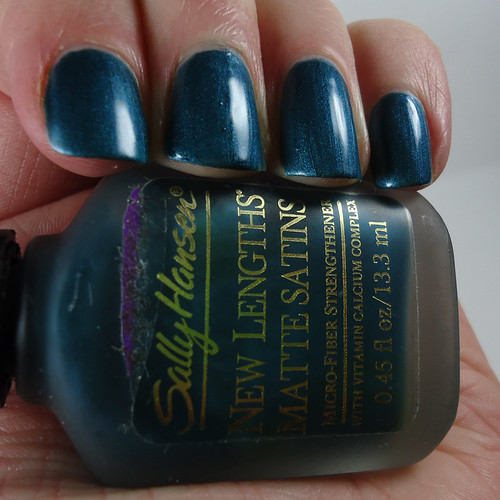 I could have got away with two coats, but I ended up with three (mostly to work around the aforementioned pigment chunks). For a vintage polish, it dried to matte surprisingly fast, but I bet it would have still been dentable for the next ten years. Techno Teal Matte is the highlight of what I have seen of the Matte Satin collection and it may even have inspired me to try some of the new Sally Hansen Satin Glam polishes that I have seen floating around. 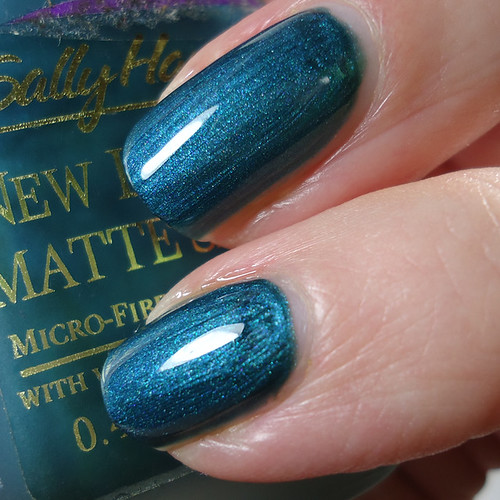 I decided to include this one shot of it glossy since as pretty as it looked, the topcoat pretty much melted the polish on contact. I know some TC’s don’t play with vintage, but this is the first time I have hit a snag with Pretty Serious Aqua Coat. And I use it a lot. Maybe it has something to do with the matte formula? Anyway, get a load of that shimmer!

I hope you’ll forgive me for this “green by technicality” entry for Green September. (Of course you will, it’s so pretty!) Check back tomorrow for Streetwear Sunday, Green September edition!